5 Strategies you can use to Handle Conflict at Work 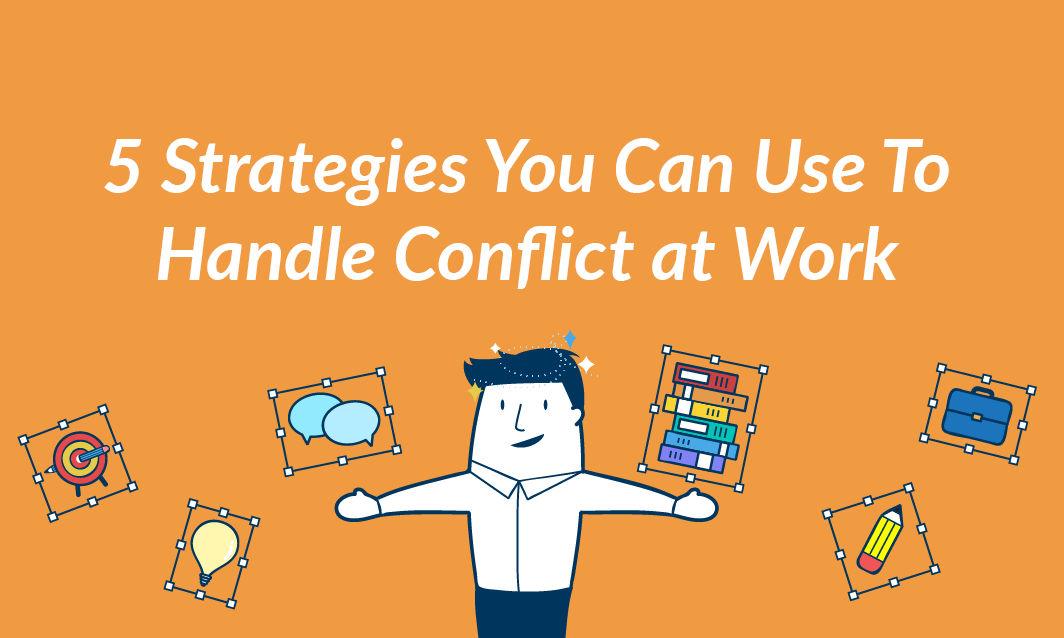 Conflict is a natural consequence of human interaction and is inevitable in the workplace.

When employees clash, they can become concerned with defending their viewpoints that they cease to communicate. Mutual distrust starts to build up and threatens workplace relationships.

This does not mean that conflicts are a bad thing, as disagreements can be productive and motivate people to do better. Your role as the manager is not to prevent conflicts, but to prevent conflicts from becoming a disruptive force in the workplace. Conflicts can have the power to generate constructive dialogue and develop new ideas too. This may sound contradictory, but it is true to some extent.

Often, managers are tasked to act as mediators between employees.

Here are 5 strategies you can use to handle conflict at work:


2. Listen carefully and reserve your judgement

Let each individual be given an opportunity to speak and no one is allowed to interrupt. This phase may turn out to be a time-consuming and emotional session. But it is important to let everyone feel that they have contributed to the discussion. The manager needs to be an active listener, who is able to pay attention to both the words and body language of the affected parties. Letting both parties vent is important, as they will be more receptive to reaching a compromise later. As the mediator, you will need to refrain from making judgement calls on either party and instead remain an objective voice to successfully resolve their differences.

In clarifying and understanding the situation, it is vital that the manager highlights the facts of what has happened and not criticize personality traits. More importantly, note that we should not be making accusations on the person but that the spotlight is on addressing the issues that has surfaced from the conflict. Once things are taken personally, everything will go out of control. There is a famous quote from Albert Einstein that goes “We cannot solve our problems with the same thinking we used when we created them”. This implies that a problem arises due to the various perspectives we have. Therefore, get both parties to write down everything they know that is true to the problem. When the facts are thrown out to the open, everyone’s understanding of the problem can be raised.

Help both parties identify what are the points of agreement and write them down. Even though both parties may be in conflict, they are likely to be on the same page in achieving a particular goal. Define the differences and discuss how they would plan to work on the conflict. If there are matters where it is impossible to reach a compromise, the mediator will then need to help both parties agree to disagree on these issues. Indicate the potential areas of agreement and actions to be taken to resolve the conflict.

5. Have a written agreement

Gain commitment to change. The manager should have both parties ink down the final solutions, which will serve as a reminder of what each party has agreed to do in order to resolve the problems. This document will be reviewed and signed by everyone, including you as the mediator. The benefits of the mediation session should be clear. This process boosts morale by helping to put an end to the disagreements and getting past the pent-up emotions of both parties. Finally, it may also be wise to consider discussing some actions that will be taken if there is no resolution of the conflict.

We hope that this article is helpful. Do you have any tips you would like to add?
Let us know in the comments and please share this post with a friend/colleague if you enjoyed it!

4 Superb Ways to Probe for Feedback Without Your Employees Knowing

It is true that the higher you climb up the corporate ladder, the lonelier it will be and most new managers can attest t...

END_OF_DOCUMENT_TOKEN_TO_BE_REPLACED

How to Deliver Positive Feedback to Your Employees the Right way

Everyone enjoys being praised. However, most managers only praise their employees during the annual performance appraisa...

END_OF_DOCUMENT_TOKEN_TO_BE_REPLACED

How to Conduct Effective one-on-one Meetings With Your Employees

In most companies, employees get one on one time with their managers only once a year during their performance appraisal...